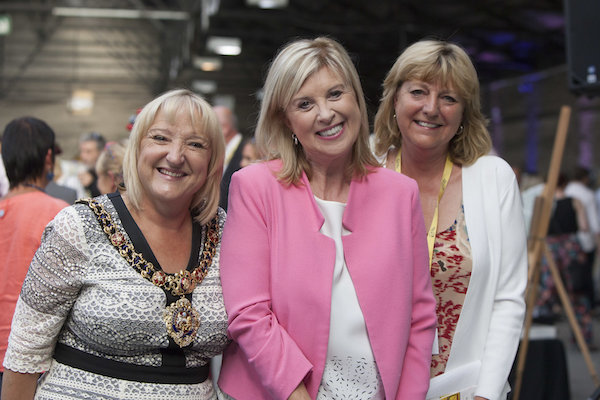 A week in the life: Sally-Ann Wilkinson

Do you want to know what a week in the life of Sally-Ann Wilkinson, our co-founder, looks like?

Get yourself a cuppa and read on for a glimpse into her exciting and creative world.

Wide-awake and buzzing already as it’s the start of an exciting week for Wild in Art. Twelve months of strategising and planning with Manchester City Council – and more recently lots of late nights – will be realised with the Previews on Tuesday and Wednesday of Bee in the City, our public art event for the city of Manchester.

What better way to celebrate Wild in Art’s 10th anniversary than with a special event in our home city? I send a message to the other person responsible for these bonkers events involving giant fiberglass animal sculptures, my co-director, Charlie. Still can’t quite believe it’s been a decade since we joined forces after CowParade and brought Superlambananas to Liverpool.

Catch-up with our Creative Director (and my husband), Chris, to see the latest treatments to a new sculpture design for a potential event in Bristol. Fingers crossed it’s a goer and we can move into making a life-sized sample of the proposed sculpture.

Try to unwind in a yoga class. Must remember to double check we’ve got enough wine for the Bee events later this week.

Start the day with a morning meeting with official charity for Bee in the City, the Lord Mayor of Manchester’s We Love MCR Charity. The event gives people the opportunity to help raise funds for the charity through the art trail – simply by downloading the app or by organising their own fundraising events inspired by Bees.

Over coffee we run through the latest timeline for the auction of the Bees in October. With just days to go until the colourful super-sized sculptures are on display around the city, we attempt to work out which ones people will be clamouring over to buy. As one of its most meaningful legacies, the fundraising and auction will help our great city to be the best it can be.

Spent the afternoon with our amazing team setting up the 101 Bee sculptures ready for their preview to the community groups. Teams of residents from communities across the city have taken part in workshops with professional artists to design and create 23 very special Bees, which will be displayed across the north, south, east and centre of Manchester, and Greater Manchester.

They’re a stunning showcase of the issues that are particularly meaningful to the groups involved. From the art of beekeeping to the love of their parks; Girlguiding superstars and an Ancoats choir; workers’ rights and the suffragette movement; LGBTQ+ creativity and Manchester Firsts; future Olympians and a super-powered Bee.

All the community groups involved arrive to see their 23 Bees within the ‘colony’ and I take the opportunity to thank them all personally for believing in the event, their support and dedication. The excitement is palpable and emotions are running high; overwhelmed to see in action how creativity can bring people together.

The last meeting of the day is a debrief with the team. Check the weather forecast for the umpteenth time for tomorrow’s VIP Preview.

Spend the journey to our Federation office space running through my speech for tonight. Looking forward to joining Well Pharmacy and Virgin Trains, our Presenting Partners, in welcoming all our Bee sponsors and artists to the VIP Preview.

Meet with the team who’ll be moving the Bees from our central warehouse in Mayfield to their trail locations. The trail covers the city centre, as well as the suburbs. With more than one hundred Bees to move while the city sleeps, we’re working closely with stakeholders and landowners to make the installation as smooth as possible.

Spend a couple of hours preparing for a meeting at XTRAX, a street arts development agency, which I sit on the board of. Then back to Mayfield for show time!

Before guests arrive I speak to BBC North West and Radio Manchester. At the same time ITV Granada interviews our Head of Creative Development, Ben. I attempt to take a moment to take it all in and enjoy the atmosphere: a ski band is playing, the great and the good of the region are admiring the sculptures, and the sun is shining. Time to take to the stage with Sir Richard Leese CBE, Leader of Manchester City Council.

How do you get 101 super-sized Bee sculptures installed around the city? With a stellar line-up of volunteers from Willmott Dixon and ISG, and the expertise of our City Council’s event’s team. The coordination of the installation is one of the most complicated elements of our events, and we draw on our experience from previous events in major cities such as London, Sydney and Cape Town, to help plan it.

Starting out as blank 3D canvasses, artists from Manchester and further afield have transformed the Bees into covetable works of art – so the careful movement of them is critical. Plus, music legends such as the Gallagher brothers and the Rolling Stones have backed the event and added their signatures to particular sculptures.

The day goes by in a flash of frantic phone calls, last-minute preparations, and lots of cups of tea. In the evening I schedule in a catch-up with our account managers next week to check in on our other events taking place this year around the country; giant sculptures of hares, penguins, giraffes, robins, Snowdogs and snails.

Must remember to #BeMoreSnail as our Brighton Snailspace event aims to encourage people to do; take a pause and appreciate the things that make us smile.

Arrive into Manchester Piccadilly station and meet our Head of Partnerships, Julie. We grab a coffee and talk through the speech for this morning’s event with Virgin Trains, the naming of a train to celebrate the upcoming opening of Bee in the City. The train Bee Together, Pendolino 001, will travel between Manchester and London, and be seen by millions up and down the route. That’s one very busy bee!

After the naming ceremony, it’s back to the installation and preparing for our afternoon team briefing. Next Friday will look a lot different; I’ll be attending the first of Well Pharmacy’s Feel Good Fridays! The national pharmacy chain is the official Health & Wellbeing partner for Bee in the City, so to complement the trail they’ve put together a programme of free activities in the historic setting of Deansgate – Castlefield. There’ll be Disco Yoga, Zumba, Pilates to Mindfulness – must remember to pack my trainers!

Manchester is such a unique city in many ways, and one of those is its ability to bring people together. Different sectors have collaborated to create this fabulous event, including the public and private sectors, schools and community groups. As well as a celebration of creativity, the trail is also a celebration of unity.

It’s going to be a summer filled with joy as families and friends take to the streets to complete the trail from 23 July until 23 September. I hope that people will remember 2018 as the year that the Bees came to Manchester!