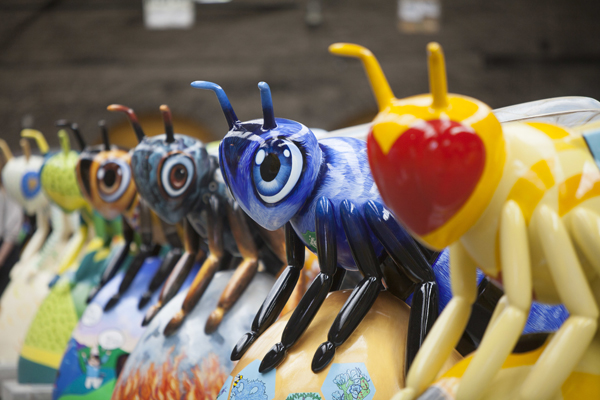 A giant colony of super-sized Bee sculptures has winged its way to Manchester!

Bee in the City is one of the biggest public art events the city has ever seen.

Over one hundred giant worker Bee sculptures, each decorated with its own unique design, are now on display around the city centre and further afield. Plus, there are 131 little Bees created by children and young people to find.

It’s unmissable, free, family-friendly entertainment – perfect to enjoy whilst taking in the city’s landmarks, cultural gems and areas you may not have explored before.

Music A-listers get behind Bee in the City

Music is in Manchester’s heart and so Bee Live in MCR signed by A-listers the Rolling Stones, Ed Sheeran and Taylor Swift is a must-see. Other top picks include I Wanna Bee Adored signed by the Stone Roses’ bassist Gary ‘Mani’ Mounfield, plus Bee Here Now, a design that celebrates the Manchester music scene as a whole, with portraits ranging from Oasis and Joy Division to Herman’s Hermits.

Pick up a map

So what are you waiting for? Bee an explorer and pick up a map from various venues around the city including Manchester Visitor Information Centre, Manchester Central Library, Corn Exchange and the Lowry Outlet.

If you’re travelling into Manchester Piccadilly train station don’t forget to look out for a very special train. Called Bee Together, the pendolino’s new name chosen by staff at Virgin Trains celebrates Bee in the City and Manchester’s solidarity and strength.

Collect Bees, view your trail progress, unlock exciting rewards and trophies along the way, add photos to our Gallery and share on social media. You can also stay fit and keep well, track your distance, steps and time on the trail using the handy pedometer in the app.

Bee in the City’s Honey Pot shop is open in the Corn Exchange, Manchester. Get your hands on all sorts of bee goodies, from mugs and t-shirts to limited edition prints and even local honey! Don’t miss out on the official Bee in the City Book – a great memento, featuring images of all 232 super-sized and little Bees, along with special features, exclusive interviews, and lots more.