Tortoises are taking over Jersey!

We are delighted to reveal that our new giant tortoise sculpture will be creating an art trail for the Durrell Wildlife Conservation Trust. 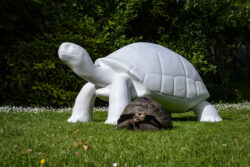 The sculpture was unveiled at Government House at the launch event for Durrell’s next trail – Tortoise Takeover.

The team that brought you Go Wild Gorillas in 2019 are once again be partnering with us to inspire Islanders and visitors to explore Jersey and connect with nature.

These charismatic creatures will be taking over the island during the summer of 2023 as ambassadors for the work that Durrell undertakes with reptiles across the globe.

The trail will bring colourful, inspiring, and thrilling works of art to Jersey’s wild and urban spaces.

The sculptures will lead people on a trail of discovery, not only to see the tortoises themselves but the nature in which they are placed.

Each of the giant tortoise sculptures will be sponsored by local businesses and designed by artists from Jersey, the UK and beyond.

In addition, there will be young tortoises decorated by schools and community groups that will form their own ‘shop window’ trail.

After the trail, the sculptures will be auctioned to raise funds to build a new Tropical House at Jersey Zoo.

This will support the many species of threatened reptiles and amphibians looked after by Durrell. The young tortoises will return to the schools and community groups that created them.

Dr Lesley Dickie, CEO of Durrell, said: “From the highly endangered ploughshare tortoise in Madagascar to the amazing Aldabra giant tortoises that we deploy on Round Island off the north coast of Mauritius to act as ‘ecological engineers’, Durrell has a long history of working with tortoises. Not only are these ancient creatures important actors in their ecosystems, but they also hold key cultural values across multiple countries.”

“Tortoise Takeover will mark the launch of our campaign to raise funds to build a new Tropical House, which will allow our team to continue the exemplary care they provide for these precious species into the future.”

Charlie Langhorne, Managing Director and Co-founder of Wild in Art, said: “We are very excited to continue our partnership with Durrell. Tortoise Takeover is a fantastic opportunity for businesses, the creative sector and communities to come together and create something very special for Jersey. With your support, we can create an event that will have significant impact during the summer of 2023.”