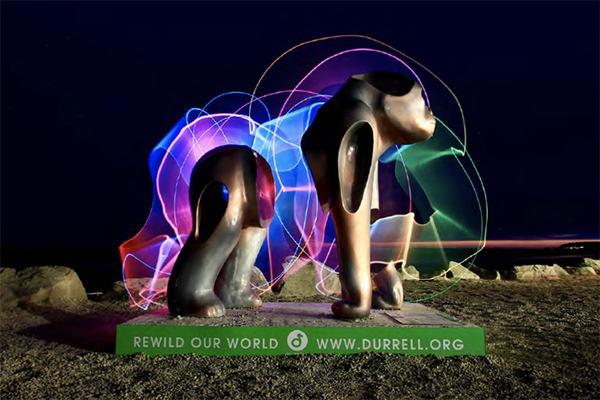 We worked with charities in Scotland, Jersey, Isle of Man, Ipswich, Plymouth and Tyne & Wear to create events that brought businesses, artists, communities and young people together.

After entertaining thousands of people, and getting people outdoors and sharing their stories, the sculptures were sold in a series of auctions.

It’s been a year for making history. Popular Go Wild Gorillas silverback ‘The Space Between Us’ by artist Andy Coutanche raised the auction room’s roof when it was sold for a record breaking £72,000, the highest figure a Wild in Art sculpture has ever sold for.

The proceeds from the auctions are being used by the charities to continue to make a difference, supporting patients and their families in St Oswald’s, St Elizabeth and St Luke’s Hospices, and children’s hospitals across Scotland.

Durrell Wildlife Conservation Trust has kickstarted fundraising for a state-of-the-art home for its gorilla family.

Just some of our highlights…

Continuing our partnership with the National Literacy Trust to support their schools and communities outreach work.

Elmers in Maidstone, Cows in Cambridge, Hares in Southend, Rams in Derby, Imps in Lincoln, Lighthouses in north-east Scotland.

Me and UooUoo in Melbourne, Australia, to mark The Royal Children’s Hospital’s 150th anniversary.

New work for event partners in New Zealand – soon to be announced.

And for every large sculpture we exhibit, three trees will be planted to help recover the Atlantic Rainforest in Brazil as part of a project by Durrell Wildlife Conservation Trust and their partners at Instituto de Pesquisas Ecológicas.