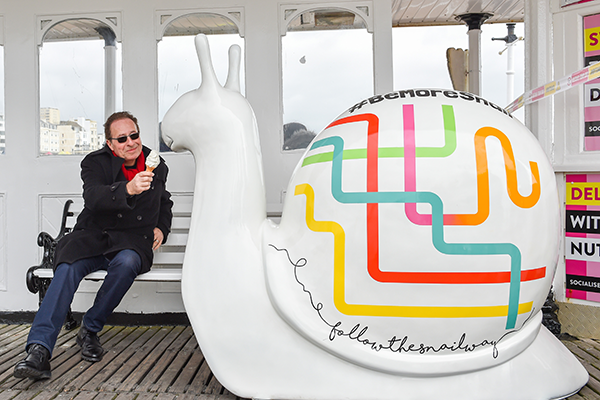 To mark the publication of best-selling author Peter James’ fourteenth novel in the Roy Grace series, Dead If You Don’t, Peter will be the proud sponsor of a giant snail as part of this autumn’s Snailspace art event, Brighton.

The internationally-renowned author has been a long-term supporter of Martlets and participated in Snowdogs by the Sea, the Hospice’s first public art trail. Once again, Peter will team up with talented artist, Mik Richardson, to create a design loosely based on characters from his Roy Grace series.

Likely to be known as “NEE-NOR“ (the sound of a Police siren) or “Dead Slow” this snail will be anything but slow. He is his own little police pursuit vehicle with “D3AD 5LOW” number plates, painted lights on his head, black uniform with cap and boom mic, safety belt, lights, carbon fibre trims and police markings. He will also feature neon colour flashes to tie-in with the current design of Peter James’ books, and, hidden around his frame will be several clues to engage visitors in solving a puzzle. The giant gastropod will be on duty at the entrance to Brighton’s iconic pier throughout the trail.

Speaking about why he wanted to be involved, Peter James said:

“The Snowdogs campaign back in 2016 was a brilliantly innovative and hugely fun event, which raised an enormous amount for one of our city’s finest institutions, Martlets. The residents of Brighton and Hove are fortunate to have this amazing hospice, it is a truly wonderful and caring place with some of the loveliest and most devoted staff I’ve ever met anywhere.  And, as it is dependent on fundraising for much of its running costs, I’m delighted to be able to get involved in another art trail and I love the idea of a giant snail. I can’t wait to see the design take shape and my fans interacting with it on the pier. I feel very honoured and thrilled to be part of this.”

“Peter James is an invaluable supporter of the Martlets and we’re absolutely delighted to announce his involvement in our Snailspace campaign. We are humbled by his tireless commitment to us and his passion for articulating the importance of end of life care. His profile, within the city and far beyond, means he lends our campaign significant promotional opportunities and we’re so looking forward to working with him again. “

His mighty mollusc will take its place alongside 49 other giant snail sculptures, each uniquely decorated by artists. They will sneak their way onto the streets of Brighton & Hove from Saturday 15 September until Sunday 18 November 2018. The colourful creatures will be on show for nine weeks; boosting tourism, encouraging locals to be tourists in their own city and generating a giant snail-sized ‘feel-good’ factor. This will be followed by a celebratory Farewell Event; a chance to see all the snail sculptures together. Finally, these giant gastropods will be auctioned to raise money for Martlets and its life-changing care.

The giant gastropod sculptures will also be joined by a host of more than 50 smaller snails as part of the Junior Snailway. Schools and youth groups will decorate their own snails, which will be displayed in accessible locations across the city.

Snailspace is being produced in partnership with Wild in Art, one of the leading producers of spectacular, mass-appeal public art events, which connect businesses, artists and communities through the power of creativity and innovation.