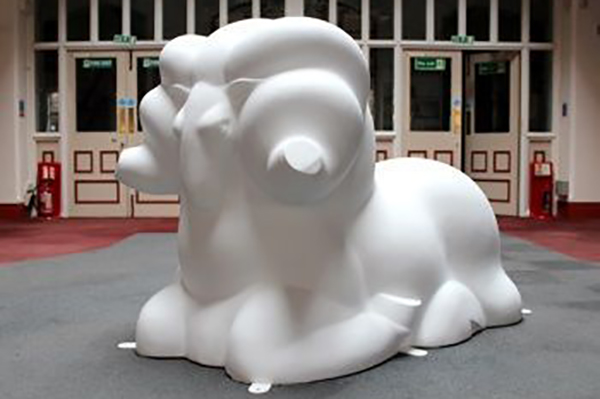 A world-class sculpture trail in Derby.

Derby Museums are seeking support from the local business community at the official launch of the Derby Ram Trail; an amazing public art event that will see over 30 Ram sculptures threaded across the city next summer in support of the charity. Nottingham have had the Robins, Manchester have had the Bees, now Derby will have the Rams.

The Derby Ram Trail will consist of around 30, five-foot high fibreglass sculptures in the shape of Derby’s mythical Ram; which, according to legend, was ten yards high with enormous horns and a huge flowing fleece. The story tells of people travelling from all over to see the huge ram, and it is exciting to think the trail will attract even more attention when it opens to the public.

Local sculptor Michael Pegler, who in 1995 created the famous stone ram now on Derby’s East Street, has generously allowed Derby Museums to use his Ram design for the Derby Ram Trail sculptures.

Each Ram needs a business sponsor, before being decorated by a commissioned artist. Once all 30 Rams are sponsored and decorated, they will go on public display. After the trail has finished, the sculptures will be brought together for one weekend, the Ram-union, before they are, auctioned off to raise money for Derby Museums’ Endowment Fund, helping to secure the future of Derby Museums.

“The Derby Ram Trail is all about making public art accessible to the people of Derby and beyond – it’s a really fun way to bring people together to rediscover and take pride in their city. The trail’s legacy will help ensure Derby’s art and heritage remains accessible for generations to come.”

The Derby Ram Trail is being led by Derby Museums in partnership with Wild in Art, a leading creative producer of spectacular free public art trails. Wild in Art trails have had a massive regional impact; attracting hundreds of thousands of visitors, generating millions for the local economy and raising substantial money for charity.

“As a 3D blank canvas, the Ram sculptures lend themselves to so many different styles of artwork. We’re delighted to be working with Derby Museums to bring them to Derby for artists, communities and young people to decorate with many unique designs.

“Our events are designed to bring the enjoyment of public art to everyone while offering new ways for people to explore their local area. There are many sponsorship packages available and we hope businesses in Derby will recognise the cultural benefits of becoming a sponsor as well as the positives for their own community.”

The first details of the Derby Ram Trail will be revealed at an official Breakfast Launch at Derby Museum and Art Gallery, attended by over 130 business delegates from around the city and region. Businesses and organisations will be encouraged to sponsor a sculpture and become a partner in the project.

Ashley Lewis, Senior BID Project Manager for the Cathedral Quarter BID, which has already pledged its support to the project, commented:

“We are delighted to be the Presenting Partner of what promises to be a fantastic event for the city. We look forward to welcoming the Derby Ram Trail to the award-winning Cathedral Quarter, providing an invaluable boost to the economic, social and cultural life of the city.”

For more information about the Derby Ram Trail, or to receive a sponsorship pack, contact Amy Simcox, Head of Fundraising at Derby Museums on 01332 642287 or email: amys@derbymuseums.org.