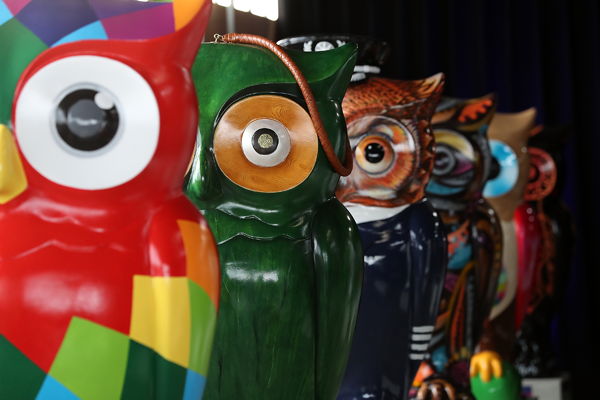 Swooping fun, colour and vibrancy into New Zealand’s North Island, The Big Hoot Owls have been taken under the wings of Auckland’s residents and visitors. Now, the sculptures are on display for one last time.

All Owls from the main trail will be perched at the Aotea Centre on Friday 25, Saturday 26 and Sunday 27 May for the Farewell Weekend, sponsored by Fidelity Life. It’s a chance to snap a ‘sowlfie’ with a favourite, see the artwork up close, and collect any final app codes for special rewards.

On Tuesday 29 May, exactly 40 years to the day since the Child Cancer Foundation was first set up as a charity, the Owls are up for auction.

For those that can’t be there in person, watch the auction live on Facebook and make your bids over the phone.

Dick Frizzell is one of New Zealand’s most celebrated painters. Influenced by the Mayans who saw the owl as very significant in their culture, Tecolote…The Messenger is inspired by an ancient terracotta artefact dug up in the Mexican desert.

Another 1.85m tall Owl to look out for is Midnight Magic by Flox. The artist’s trademark native birds, ferns and flowers – a celebration of Aotearoa’s environmental taonga – can be seen in the design. A contemporary artist with an international following, Flox’s work can be found in Berlin, Hong Kong, New York, Taiwan, and India, as well as New Zealand.

Owl-Black is a hit with rugby fans.

Created by Samoan artist John Unasa, Owl-Black is not only beautifully painted, it features signatures from some of the rugby greats, including Jerome Kaino, Sir Brian Lochore, Chris Jack, Ian Kirkpatrick and more.

If music is more your thing.

For your Owl fix, you can buy cuddly owls, as well as figurines and Paint Your Own packs from our online shop.