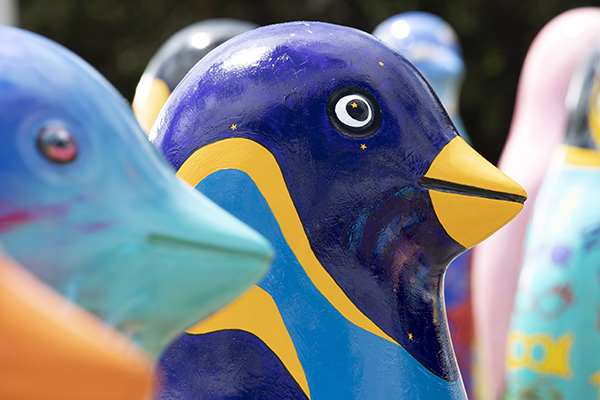 Maggie’s Penguin Parade has raised an astounding £540,000 for Maggie’s, the charity which provides free practical and emotional support for people living with cancer, at the live auction alone.

The funds were raised at an auction at V&A Dundee, where the 80 charming, life-sized sculptures which have spent the summer dotted across Tayside as part of an art trail, plus two mini ones, found new homes all over Scotland and beyond.

Including one penguin, Don, sponsored by the King Group, whose designer Angela Nisbet drew on Andy Murray’s 2013 Wimbledon win for inspiration.  It is now going home with the tennis star’s Mum, Judy.

With still more funds to come from the Maggie’s Penguin Parade, the total auction figure alone is enough to fund Maggie’s Dundee, which sees between 50 – 70 visits a day from people with cancer as well as family and friends, for a whole year.

“It has been a joy to watch the Maggie’s Penguin Parade unfold – from an idea by our Maggie’s Dundee Fundraising Board Chair Shirley Linton, to seeing the happiness they spread while stationed around Tayside, to auction where they have found new homes while raising an extraordinary amount to help Maggie’s reach as many people with cancer as possible.

“It has been an inspiring and uplifting way of raising essential funds for our cancer support centre in Dundee while also informing a whole new audience of the free practical and emotional support available at Maggie’s across Scotland and the rest of the UK.”

The Maggie’s Penguin Parade, and association between Maggie’s and Wild in Art, went live at the end of June.  Since then there have been 5000 apps downloaded and 210,000 interactions with the sculptures.  Close to 13,000 sticker books have also been sold.

Charlie Langhorne, Director and Co-founder of Wild in Art said:

“Maggie’s Penguin Parade has been a signature event for Wild in Art. We are proud of our association with Maggie’s and indeed with the community of Dundee who have embraced this event with such warmth. The money raised tonight will literally change people’s lives and we are delighted to support Maggie’s in their vital work.”

One couple even completed the art trail as part of their honeymoon while another pair of newlyweds decided to have a penguin in their wedding photos.

The penguins were then gathered together at Slessor Gardens, with the 100 mini penguins which had been decorated by school children across the Tayside area, for a spectacular Farewell Weekend attended by more than 20,000 people.

“Ever since I first had the idea for a penguin art trail in Dundee I had a feeling it would be special.

“It has been a huge team effort over the last few years, but I am so pleased at how well the penguins have been received and completely humbled by the amount they have raised to help people in Dundee live well with cancer.”

Built in the grounds of Ninewells Hospital in Dundee, Maggie’s Dundee is a warm and welcoming place, with qualified professionals on hand to offer an evidence-based core programme of support that has been shown to improve physical and emotional wellbeing.

Maggie’s Dundee relies on voluntary donations to support and grow its network of Centres and to develop its unique, high quality programme of support. The charity’s aim is to make the biggest difference possible to people living with cancer and their family and friends.