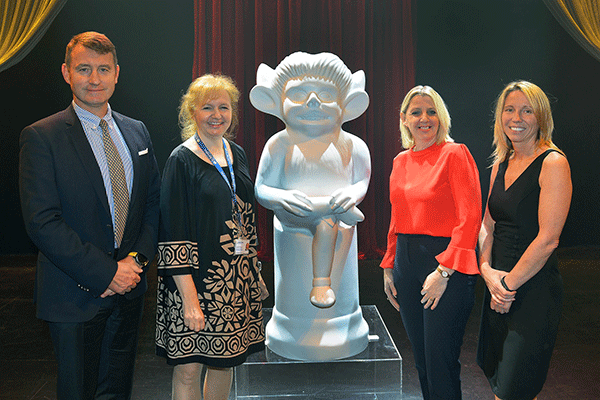 Lincoln BIG announces its call for sponsors and other supporters to get involved in the exciting new Lincoln IMP Trail.

Lincoln BIG was out to IMPress everyone with an IMPossible-to-ignore project, which follows the success of the Lincoln Charter Barons’ and Lincoln Knights’ Trails which wowed locals and tourists alike, bringing thousands of extra people into the city.

“Our previous Trails were runaway successes. They were loved by local families and fired the imagination of visitors from across the globe.

“Our Barons and Knights were constantly being photographed, popped-up in thousands of “selfies” and people globally tweeted about them. Visit Lincoln took a Knight to Kings Cross to publicise our great city and our creative business sponsors took them out and about and used them in numerous publicity stunts.

“Now we are starting work on our Lincoln IMP Trail and it is already causing a buzz with our partner Wild in Art (which has supported our earlier trails with its expertise), The EBP (our education partner) and local charity St Barnabas Hospice (which will benefit financially from the new trail).

“We want to create IMPmania in the city and we’ve got some great reasons to go for it. Statistics show that the Lincoln Barons Charter Trail in 2015 attracted 210,000 visitors and, at auction, the Barons raised £166,800 for charity. Facebook posts reached 67,694 people and the Barons’ website had more than 88,000 views.

Lincoln BIG is IMPatient to get the ball rolling, so it is looking for organisations and businesses who would love to sponsor one of its 30 full-sized Imps.  There are also special, as well as mainstream, sponsorship opportunities waiting – all offering extra benefits.

They include the opportunity for five community sponsors to get on board. The EBP is also looking to have up to 60 half-sized IMPs in its Education Trail.

As in previous years, interested professional and amateur artists will have the chance to submit decorative designs for the individual full-sized Imps and those whose designs are ultimately chosen, will work with a business or organisation on their final design.