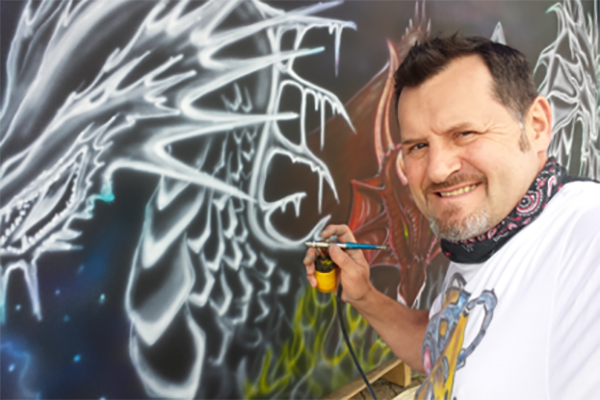 Artist Mik Richardson gives advice and answers our questions on his career and inspirations.

How would you describe the style of art you produce in just three words?

It usually doesn’t register until I’ve had a Nespresso latte at about 10am. Then there will be painting or design work, or both, which will go on until about 10pm (there are usually a lot of coffee breaks in between though).

What or who is the biggest influence on your work?

Most often my wife, Tina – my harshest, but most honest critic. She often comes up with the good ideas too, but don’t tell her I said that!

What’s the one piece of advice you would give your younger self when considering working in the arts?

Instead of spending two years trying to teach myself the airbrush, buy a book or find classes nearby!

What’s your artistic process and methods?

The design comes first. For Wild in Art sculptures, I research the sponsors, the local area, subject matter, potential names, and just about anything else to do with the event.

Trying to see the sculpture as a canvas rather than a character is sometimes hard. But the best thing is seeing the results once the varnish is applied, it usually really makes them pop.

I always try to improve and make the new pieces better than the last, but sometimes I look back at what I’ve created and think, “did I really do that” or “how did I do that?” I think it must be an age thing!

What’s been a career highlight for you?

It was an honour to be asked to design a Snowdog in 2016 for the internationally renowned crime writer and Martlets Hospice supporter, Peter James. More recently I’ve been commissioned again to design his Snail for this year’s art trail in Brighton, Snailspace.

This year also sees my first illustration book in print. It’s a children’s story written by the talented Brenda Gostling, which I’ve loved illustrating. It’s set on the front line during First World War and follows the day in the life of a field nurse, who just happens to be a hare. It’s inspired by the Hare sculpture, Poppy, which I created for this year’s GoGoHares event in Norwich.

The business Almary Green has chosen me for three consecutive trails and is sponsoring Poppy for GoGoHares. The business is donating copies of the book, called Sister Poppy at the Front, to every primary, infant and junior school in Norfolk, and net profits from sales of the book will be donated to Break Charity.

What have you got coming up?

Two Bee sculptures, a Robin for Hoodwinked and a Snail for Brighton. I’ve also got some private commissions for a BookBench and an Elephant sculpture. I’m also looking into doing another children’s story and painting promotional skips. I’m also currently designing murals for two schools, which believe it or not, is what my primary business was when I first started.

Tell us one thing that people might be surprised to learn about you.

I was in the Royal Air Force for 27 years.

What’s the best thing about being involved in a Wild in Art event?

The fact that your artwork raises incredible amounts of money for charity.

Where can people find out more about your work?

Well…you can simply Google me, or better still, see my website miks-media.co.uk.