Record-breaking results for Rocket Round Leicester

It was recently announced in an impact report that the final total raised at Rocket Round Leicester was a record-breaking £317,141 for LOROS

In 2021, 50 large and 40 small rocket sculptures adorned the streets of Leicester and were enjoyed by over 270,000 trail-goers, with each sculpture being seen by over 96,000 visitors on average. 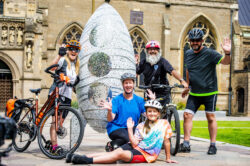 Rocket Round Leicester gave a huge economic boost to the region, with an estimated £9.87m additional visitor spend in the local economy and over 40,000 visitors took trips to the city museums, libraries and shopping centres that hosted the Junior Jets as they explored the trail.

75% of those who took part in a trail survey said it improved their opinion of Leicester and the local community.

Not only were over 19,000 young people involved in the trail but they also helped raise £44,689 within their 42 schools and youth groups.

Lots of trail-goers used the app to track their Rocketspots and along the way, 2,315 photos and selfies were uploaded and over 53,000 sponsor rewards were collected.

The LOROS team support over 2,500 terminally ill people each year, with counselling being provided to both patients and their family members, and this money could help fund