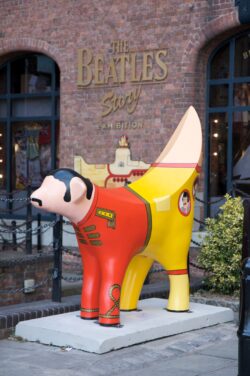 Over 115 Go Superlambananas took part in the 2008 LiverpoolEuropean Capital of Culture summer programme.

Half lamb, half banana, this quirky looking creature has become a Liverpool icon. Originally conceived by Japanese artist, Taro Chiezo, in 1998 for the ArtsTransPennine Exhibition, it was redesigned as a 3-D canvas for the Go Superlambananas public art trail in 2008.

The event raised over £500,000 for the Lord Mayor of Liverpool’s Charity Appeal.

In the Liverpool Echo Readers’ poll Go Superlambananas was voted the most popular event of Liverpool European Capital of Culture 2008. Three years later, in 2011, it was still the most recalled event of the ‘08 programme of events.