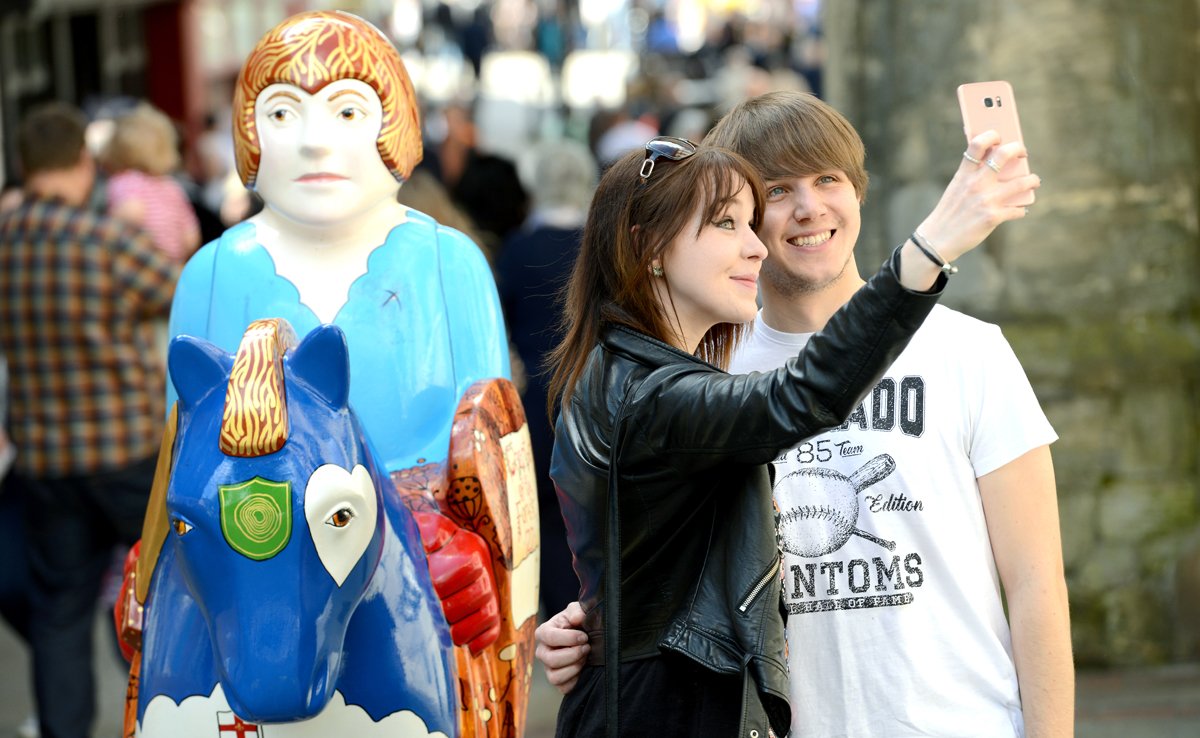 Celebrating and commemorating 800 years since the Battle of Lincoln and the sealing of the Charter of the Forest in 1217, the Lincoln Knights’ Trail was one of a busy programme of summer events in the city.

The key aims of the trail were:

It also needed to encourage people to get active, have fun and explore the city’s historic treasures and changing street scene. It followed hot on the heels of the success of our Lincoln Charter Barons’ Trail in 2015. 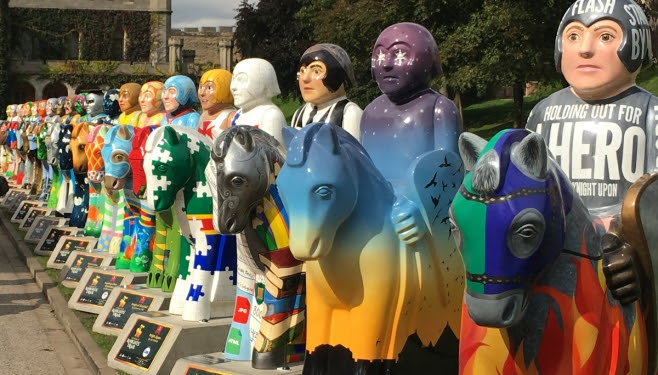 We created a brand new sculpture for this historical event. To promote the event, five of them decorated by artists popped up in London’s Kings Cross station for one day only. The stunt by Visit Lincoln scooped silver at the national Community Rail Awards for best marketing campaign. Virgin Trains East Coast also got in on the action, celebrating the event by running a competition across their social media.

Visit Lincoln, together with other tourism partners, also attended the British Tourism and Travel Show (BTTS) at the NEC, Birmingham to showcase Lincolnshire’s aviation heritage. With a number of aviation themed Knights being painted, Visit Lincoln took Knight of the Skies, sponsored by GAME Engineering to the show.

Back on home-turf for the summer, the trail opened during the Battle of Lincoln Weekend which saw a number of events and festivities taking place to commemorate the 800th anniversary of the Battle of Lincoln and the Sealing of the Charter of the Forest. These included a battle re-enactment and medieval farmers market.

Over the course of the trail (20 May – 3 September) visitors walked 150,000 miles in order to see and photograph all 36 sculptures across Lincoln. Remarkably if that had been done relay-style they would have gone around the world six times.

The knights rode to victory to raise nearly £180,000 at auction. Two-thirds of the auction proceeds went to The Nomad Trust to allow it to build more accommodation for homeless people. The remaining third will be used to create a ring-fenced Art and Innovation Fund for the city to deliver future public art and events aimed at attracting people to the city.

“The Lincoln Knights’ Trail has been really great. It has encouraged people to get out and about and explore the city.

“In fact, residents and visitors have walked over 150,000 miles in their determination to complete the full trail.

“In the process, they have seen some parts of the city they may not have visited before, learned more about Lincoln’s history and caught-up with the latest developments taking place.”

The EBP rises to the challenge

As a social enterprise already working with thousands of young people, schools and businesses across the country each year, The EBP jumped at the opportunity to be the official education partner for the Lincoln Knights’ Trail.

The EBP signed up more than 40 primary, secondary and special schools from all over Lincolnshire to take part in the learning programme, which was launched at the Lincolnshire Show.

All of the participating schools designed and decorated their own half sized knight sculptures. They also worked through an extensive resource pack created with EBP’s experienced education specialists, featuring lesson plans and curriculum links to a whole host of subjects. At the end of the event, Hollywood actor with Lincoln connections Colin McFarlane, gave the trail a fitting end by ceremoniously handing the knights back to their schools.

“At The EBP we are committed to developing the skills of young people throughout the country, so when an opportunity arose to be the education partner for a major event taking place in our home town we saw the opportunity to work with thousands of students to encourage their creativity and connection to the world that they live in today.”

“Overall a very rewarding event leading to a whole range of opportunities for students and staff and a great way to celebrate the community ethos that we are incredibly proud of. Our Knight truly represented this and the project gave us the wonderful opportunity to share it across Lincolnshire and beyond!”

The Lincoln Knights’ Trail was an outstanding success with audiences flocking to the city to enjoy a high-quality arts experience. Research conducted by Lincoln BIG found that nearly three-quarters of respondents stated their overall impression the trail was ‘brilliant’.

Audience feedback from the research was exceptionally positive and inspirational – the atmosphere in the city was widely commented upon so too was the fact that the trail offered something for families and people of all ages.