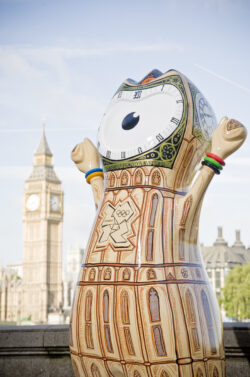 As part of the ‘Mayor of London Presents’ programme of free, cultural events and activities for the 2012 Olympic Games, Stroll took participants through different cityscapes, taking in tourist attractions around the capital.

Six unique discovery trails were developed by the Greater London Authority (GLA), with the aim of encouraging Londoners and tourists alike to explore the city on foot. Their ‘guides’ were 84 official Olympic and Paralympic Mascot sculptures located at iconic locations and other spots, including in central London, the City, east London and south of the river.

The ‘Wenlock and Mandeville’ mascot sculptures were around 2m in height and were individually and colourfully designed to capture an element of London life.